8 years ago in Neuroscience

How you make perfect sense of your senses

Did that title even make any sense? Seriously though — have you ever taken a moment to actually think about what goes on inside your head to process the feeling of your physical-self at this present moment in time? — the mild weight of air on your skin or knowing the exact orientation of each of your limbs, eyes and head without really having to think about it? 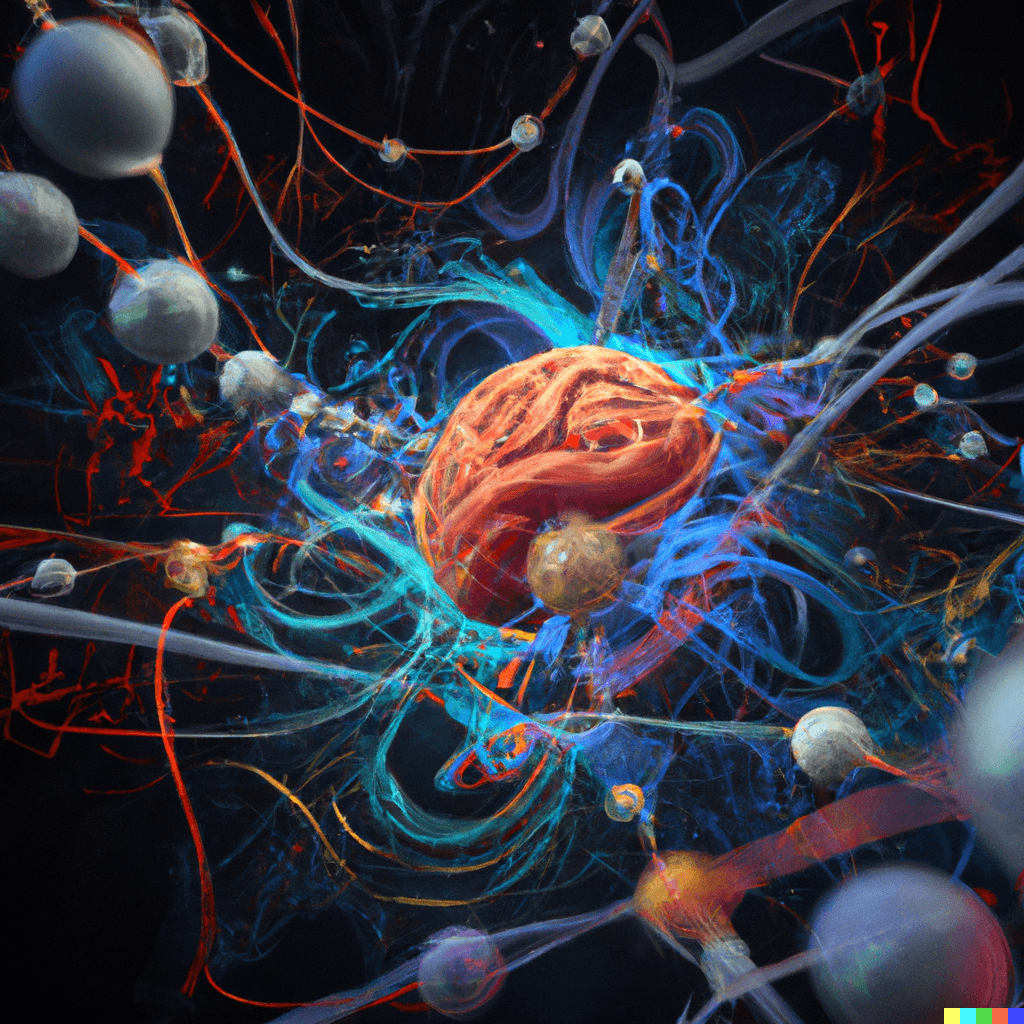 Take a moment to understand the human brain.

It’s easy to fall under the delusion that the tasks of simply feeling things such as the orientation of your body are too ordinary to ever worth mentioning; but the fact is, even these minimal tasks take up tremendous amounts of computational power within our brains to process — and it’s the very reason it makes this one of the most interesting topics to explore as a science enthusiast! Let’s begin with the ‘sensors’.

Our mind constructs its sense of space using a combination of senses which includes vision, hearing, touch, body position, balance and movement. This is an extremely complex process which engages all our senses coherently to give us a clear-cut sense of our physical-self and surrounding environment. This understanding includes a continuous feed of your complete orientation (body positioning), a sense of all the objects within the given environment and other factors such as temperature, sounds and etc.

It’s impossible to talk about all theses senses in-depth through a single post. For the sake of keeping this article interesting and open to readers from any background I’ll only be covering the topic of sensing body positioning.

There are two types of sensors involved with measuring the positioning of our body, or to be more specific — the positioning of muscles. Namely they are the Golgi Tendon Organs and Muscle Spindle Receptors whose combined signals allow the brain to accurately perceive the bodies configuration.

Forget the complex terms and sensors — the wow factor here is the amount of information our brains compute every millisecond you’re alive to simply be aware of your current physical-orientation. And this process happens even when you’re doing absolutely nothing! Ain't that amazing?

That was just body positioning, and it’s like shooting fish in a barrel compared to what the brain has to go though in order to process inputs from other senses such as vision and hearing. Now imagine all these inputs being processed simultaneously to give you a unified sense of your body and it’s surrounding space!

This is an illusion which occurs when vibrations are applied to muscles. For example when a vibration is applied to the biceps muscle of your arm, it creates the illusion that the arm is actually moving (try it !); it stimulates the stretching of muscles which usually occur only when the muscles are actually moving.

This illusion requires that the participant is blindfolded, because vision has the ability to override the sense of your body position from these receptors.

Now try this with the person holding the tip of his/her nose while vibrations are applied to the biceps. Most subjects usually say that they felt as though their nose was extending (yes, just like Pinocchio!) as they felt their arm extending outwards. 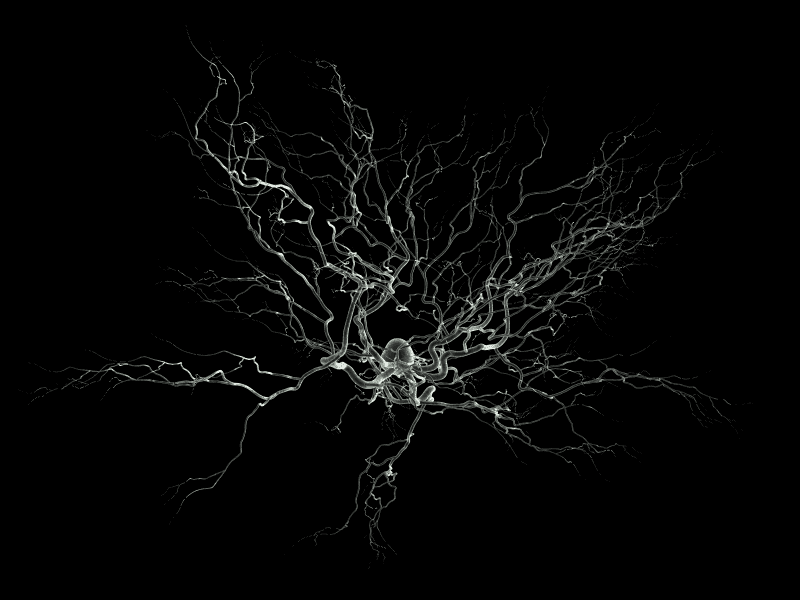 Next, to understand how these physical stimuli are converted to electrical signals–

The creation of an electrical signal from a mechanical force in a neuron occurs though a process called mechanotransduction — it’s the mechanisms by which cells convert mechanical stimulus into chemical activity, which then leads to the creation of an action potential; or the so called ‘firing’ of a neuron.

This action potential is a result of a cascade of complex chemical processes triggered by an initial physical stimuli. We don’t know exactly how the Golgo Tendon Organs or Muscle Spindle Fibers activates this process; perhaps the mechanical force directly opens ion channels or it may operate on a protein molecule which changes it’s shape to set in motion a biochemical chain of events leading to the generation of the signal [1].

This might all sound rather complex to anyone without a background in biology, if that’s the case; this CrashCourse video or this video on action potentials might be of help to get a basic understanding of the nervous system and action potentials respectively.

As mentioned before the action potential is the so called ‘firing’ of the neuron, and is a result of a cascade of processes which lead to the voltage within the neurons spiking from -70mV (resting state/potential) to about +40mV. The diagram below clearly illustrate the creation of an action potential. 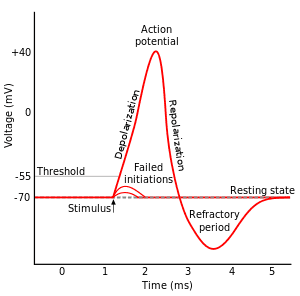 The process is started off by the opening of sodium ion channels— which causes sodium ions to pour into the neuron; creating a positive electrical potential. The process results in a positive feedback loop, causing more and more sodium ion channels to open until the voltage finally reaches +40mV. You can find out more about the creation and passing of action potentials though the aforementioned video. 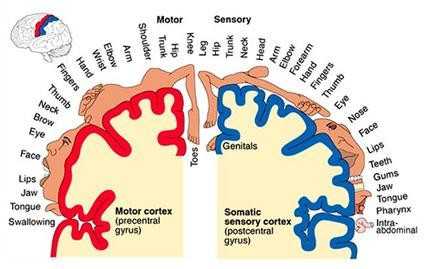 The senses from all parts of our body are mapped onto specific parts of our brain — this is called a somatotopic map. This was studied extensively by Canadian neurologist Wilder Penfield who, when he opened up the skulls of his patients for brain surgery would sometimes apply a small electrical jolt to different parts of the brain and ask the patients (while still conscious) if they felt anything — this lead to him mapping out these various senses on the brain, eventually leading to a surreal portrait of the human body stretched out across the surface of the brain.

The aforementioned mapping of neurons in the brain results in the possibility for an interesting phenomenon referred to as the phantom limb syndrome. In layman’s terms it’s where amputees sometimes start feeling sensations (usually pain) from a missing limb.

When a limb is amputated from a patient the region of the brain mapped to the given limb stops receiving neural signals, you can go as far as to say this region gets rather ‘hungry’ for nervous stimuli and can result in signals from neighboring regions mapped to different parts of the body flowing into and taking over this vacant region of the brain — causing feelings to be felt as though they were coming from the missing limb. It is important to note that only 5 to 10% of individuals with an amputation experience this phantom sensation [4].

Now back to the brain… and eyes

Let’s talk about how the brain processes certain images. Specifically how our brain interprets visual signals and sometimes manage to fill in the gaps.(What’s with the sudden switch? It’s kinda more interesting to talk about — trust me, you’ll appreciate it when I’m done!) 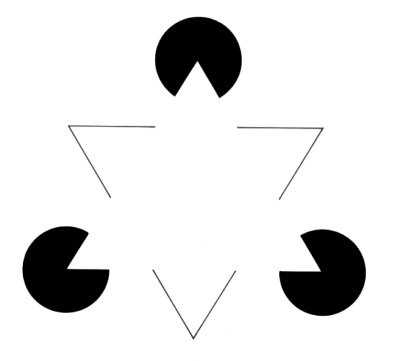 Do you see a white triangle on the photo above? Notice the contours you happen to see even though they aren't actually on the diagram? This is because the brain doesn't simply process the visual information; but actively tries to interpret it in the visual cortex and at times, fill in the gaps [6].

“The brain abhors a vacuum. [It] fills in information that was not there.” — Scott Fraser

The detailed theories of how this may happen is quite interesting. But to make sense of it all we need to know a bit about how our eyes sense light.
The backs of our eyes (retina) are lined with light-sensitive cells known as photoreceptors. Each of these photoreceptors have a specific receptive field. Which means that a single photoreceptor always reads light from a specific part of the scene — this results in the formation of a map (think of it like a projection) of the visual scene at the back of the retina, which is inherited and mapped in the exact same manner onto the visual cortex of the brain — which is where your vision is processed. This is called a retinotopic map and it’s one of the main reasons we understand and sensibly process visual scenes. 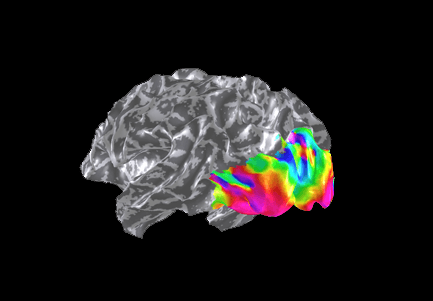 A retinotopic map projected on a 3D reconstruction of the occipital lobe.

Now to explain those illusory contours. The crux of what happens here is that the brain sees the contours of a triangle on the black circles and fills in the gaps; forming an illusory triangle. One of the theories suggest that, when the neurons at two of the circles are fired it also causes neurons with similar orientation in between them to fire partially — resulting in us forming the illusory contours of a triangle. A similar process occurs when you try the blind spot illusion.

I recently took the course on The Brain and Space by Dr. Jennifer M. Groh, Ph.D. and it was truly the most interesting program I've invested my time in researching and learning how our brain really processes things.’.

Consider the above article my notes on the subject and a quick summary of some of the most interesting topics I have come across.